Fourth Argonaut to have more
all purpose yards. 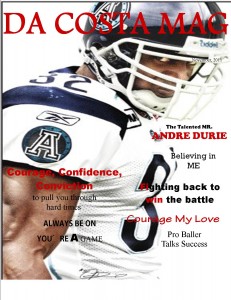 Andre Durie, had a humble way about him in that he is not like the average egotistical and arrogant athlete who has made a name for himself. Andre is far from a narcissist; in-fact, he is quite the opposite. At the time I was not aware of his football career with the Toronto Argonauts and he made no attempt to divulge his pro-football status or his many athletic achievements. Now, looking back, he seemed secure with who he was and who he has become. It’s like he was in complete possession of himself because he knew the struggles, battles and challenges it took him to get where he is today.

“I couldn’t give up, my zeal for football wouldn’t let me.”

Thirty-year-old Durie, a Mississauga native who now resides in Burlington, rose to football prominence in 2007. Durie played football for the York University Lions back in 2003 in his junior varsity year. As a running back, he set a Junior Ontario Varsity Football League record with 22 touchdowns in a season. In 2004, Andre had a record-breaking-season in which he started eight games at running back. He set an Ontario University Athletics record for a single game rushing yards with 349. He also set single-season York records for rushing yards (1,367), scoring (96 points), and rushing touchdowns (15) as well as a career York record for rushing touchdowns (23). It didn’t stop there for this rising threat. Durie also tied a CIS single-game record with six touchdowns to lead the Lions to a 55-33 win over Waterloo Warriors. Durie was branded as one of the best running backs in Canada- Wikipedia.

The sky was the limit for this young football star. In 2007 he was being scouted by the NFL until unforeseen circums tances shattered his dream to become a professional football player. Andre shredded his left knee- three torn ligaments, four torn muscles and a crushed nerve- while playing for the York Lions. He was told by doctors and medical specialist that he would never run, walk or play football again due to the severity of his injury. This heart-breaking news left Durie extremely devastated and crushed, thinking that all hope was lost for his fast-rising football career. Even though there wa s no sensation in his knee, Durie says, he would not accept the fact that he would never walk again. Instead, he refused to give up and pushed himself in physiotherapy; he was indeed determined to work hard to overcome his injury. “It took a lot of hard work, but I did not give up, I couldn’t give up, my zeal for football wouldn’t let me,” he says.

Many physical rehabilitation sessions later, Andre’s severe injury was no more. Later in the year 2007, Durie caught the attention of Argos management at a league evaluation with his impressive athletic skills which resulted in his he playing pro football for the Argos as a free agent. The rest, as they say, is history.

In his first year with the Toronto Argonauts, Durie played the hybrid position of a back/receiver and in his first three years played as a kick returner and backup running back. Last year (2010) was his first season as a wide receiver when he took on a new and challenging position that he all too soon came to master. As a wide receiver, Durie had to again work hard to perfect his new position by learning how to sit in zones, read man, cover zones and, most importantly, be clear on pass routes. He says, “It’s starting to become that natural spot for me. I’m starting to really enjoy it.”

This speedy pass-catching specialist will do whatever it takes to become a successful football player. “I have worked very hard to learn the ropes as a SB/R. I will continue to work very hard and I will do what it takes to become th e best player I can be,” he says. Through the intense training at practice, Coach Jim Barker believes Durie has only begun to tap into his unique potential and has become a much more complete player.

Durie has all the qualities that make-up a good receiver. He is ambitious, dedicated, agile , has incredible speed, and he is able to dodge and change direction without changing in speed. His arms are like the Incredible Hulk’s: monstrous, smashing, massive, rock-hard with the veins popping out if you know what I mean. Trying to stop this hunk, oops, I mean Hulk from catching the football would be nearly impossible.

Andre attained a 1000 yard kickoff return seas on, becoming the fourth Argonaut to do so, with 43 returns for 1033 yards with 11 carries and 54 receptions last season. Wikipedia. This dark chocolate heart throb receiver can catch a pass like no one’s business. It is without a doubt that the Argos’ head coach chose the right player for the job.

Although Andre eats, breath and sleeps football and was born to be a professional player he also h as another love. This love is a special kind, a love that only a father has for his sons, this love is for Malcolm, 9 and Cian, 7 who he sees on the weekends. Malcolm was diagnosed with Autistic Disease at an early age. Autism is a disorder that Durie had heard about but had little knowledge, however, he made it his top priority to educate himself on Autism in order to be as attentive as possible to his son’s wants and needs. According to Andre, doctors said Malcolm has Savant Syn drome. Savant Syndrome refers to a rare condition in which people with developmental disorders have one or more areas of expertise, extraordinary abilities, or brilliance similar to those of the character Raymond in the classic movie Rain Man. Andre says, ” Malcolm taught himself how to play the piano at age 2. He is an inspiration to me.” Wow! Such an amazing little boy, and a special talent just like his father.

All pictures were taken from Audre’s Facebook page with his permission.