Candidate Councillor who takes integrity to another level.

——- STEELE PALANTHROPIST: NOT ONLY WANTS TO HELP HER COMMUNITY BUT TO SERVE IT’S RESIDENCE AS CANDIDATE COUNCILLOR. 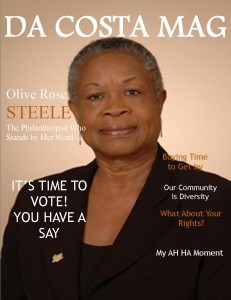 As I excitedly entered the small but quaint local coffee shop, I immediately noticed a distinguish lady whom I figured to be Olive Steele. She was patiently sitting around a small modern wooden table to the far right side of the busy shop, away from where most of the customers congregated, calmly waiting. From the vague description she gave me via email prior to us formally meeting: “ I will meet you at Second Cup at 10:00 am. I have short gray hair.” Remembering the description she sent me electronically, I figured hopefully that this must be her. I gaily walked over to the meek looking older lady, our eyes instantly locked—I felt reassured  that

I was walking over to the right person. With a warm smile on her face and relaxed demeanor as if she too sensed that I am the young lady she had previously agreed to meet.

“Hi, Olive?” I asked, presumptuously calling her by her first name without getting permission to address her as such. She was twice my senior and you know how the young at heart can be, very principled about addressing them as Mr. or Mrs. I waited for her to correct me by uttering, “It’s Mrs. Steele, thank you,” but she never did. I gave her a hug and a kiss on each cheek as she welcomed the greeting and reciprocate the embrace.

“ Hi, how are you?” she replied. In the middle of our meet- and-greet session my eyes glanced at a book that was placed a top of the wooden table where she sat. It came to me. “That book cover looks awfully familiar,” I thought to myself.” The suspense would kill me if I did not

Ask Olive about this book. It seemed like a good way to start a conversation anyway so, I asked, “Are you the author of this book?”

“Yes, I am and I self-published,” she added in return.

That makes perfect sense, “I voiced. A mystified look struck her face ever so slightly so I continued on, “I have seen you before, but we were not formally introduced.  You are the same lady that was selling And When We Pray last September, 2010 at Agincourt Pentecostal church in Scarborough.”

“Yes, that was me,” she affirmed, displaying a smile of enlightenment coupled with a surprised look on her face. I told her that I had been invited by a dear friend to attend the event at that church. “Right,” was her reply. I sat down  to get better acquainted, but a few

minutes later we realized that it would be better to move to where there was more room at the two adjoined tables a couple feet away. Once we settled in the much roomier and comfortable area, Mrs. Steele offered to buy me a coffee before we got down to business. When I replied,        “ Oh, I do not favour coffee,” she said she would treat me to whatever I liked. I accepted her kind gesture. We then got up to place our orders. I ordered a regular hot chocolate with whipped cream and cinnamon on top—my fave— and a butter croissant.

Olive ordered a medium size coffee and a piece of chocolate cake to satisfy her sweet tooth. After receiving our orders, we walked back to our table and sat down again to enjoy our morning treat, or should I say my breakfast, and Olive’s dessert (smile). We smoothly talked while we ate; we shared all kinds of stories about ourselves and our past experiences as well as our love for God. It then hit me that our connection with one another was instant and effortless from the start. Despite the huge gap in our ages, we have a lot in common.

Olive Rose Steele said, “It was GOD’s plan for me to run.

HE HAS PLACED ME HERE FOR PURPOSE.”

While conversing, Steele spoke of her intrinsic nature to serve people in general and within the community. “ I am a community-oriented individual who takes a genuine interest in people.” Olive further expressed that she volunteered as a Board Directors at Mississauga Halton Community Care Access Centre (CCAC) (2007-2010), Board Treasurer at Mississauga Halton (CCAC) (2007) and Acting Chair at Mississauga Halton CCAC (2008-2010). She was also a former public servant for many years and has 25+ years of experience in Canada’s public and private sectors. She was past President of the National Council of Jamaicans, Director of Canadian Ethno-cultural Council and a former member of the Traffic Safety Council at City Hall.

As we chit-chatted and laughed some more laugh like two young high school girls about each others stories and experiences, I thought to myself how happy I was to have met Olive Rose Steele.  With this same feeling, I mentioned that I am also self-published, having published Reminders to Pray: Day Planner earlier this year and I am also a creative writer. Again, it was quite evident that our chemistry sparked when we spoke of our self-published works; her published title, And When We Pray, and for me,    Reminders to Pray. At that point Olive asked me if I had brought a copy of my planner.

“I am not running for City Councillor just to say that I am a Politician. MY CANDIDACY FOR COUNCILLOR IS MY COMMITTEMENT TO SERVE AND TO HELP THE RESIDENCE OF MISSISSAUGA, IN GENERAL AND WARD 5 IN PARTICULAR.

AFTER ALL, IT’S OUR COMMUNITY… OUR WARD… OUR HOME…”

Yes, I did.’ I said, “but I forgot it in the car. I will run and fetch it.” I got up again automatically thinking that this would be the third time I rose from the table this morning. I returned with my spiritual planner, plopped down and handed it over to her. She quickly browsed through it like a book marketing expert who can quickly critique a book without thoroughly going through it.

“ I like it,” she said. “It is a very neat idea that people will enjoy and appreciate.” She then gave me some feedback which was both positive and beneficial that I will consider for my next writing project.

Laughter and enjoyment continued to fill the air of the small coffee shop. We were in our own fun-filled world, not paying much attention to the rest of the shop patrons. Steele was gracious when she humbly spoke about running for Ward 5 (South Mississauga) City Councillor Candidate in the fall Municipal elections. Her story was indeed intriguing and inspiring. She believes beyond a shadow of a doubt that God, in whom her undeniable faith lies, was the driving force pushing her to again run for Councillor. As she puts it, “It was God’s plan for me to run and He has placed me hear for purpose.”

Olive has ran for Peel School Board Trustee and Municipal elections and garnered 25% of votes the votes in 2003. In 2006, she again was a Candidate for City Councillor, Ward 6, Mississauga, but did not gain enough votes. She then decided not to pursue future involvement in Municipal politics. It seems that God had another plan for Steele. According to Steele there were many signs and wonders she believes God showed her, hence her return to the political arena to run for City Councillor. Olive believes now more than before that her purpose lies in helping the people of the community. She feels it is her duty as a citizen and a person to give back to the community whole-heartedly by being a humble, caring and honesty public servant who loves people and who also understands cultural diversity.

Steele’s trailblazing accomplishments are quite impressive. She was President and CEO of Blackwood Consultants that provided temporary administrative, clerical and secretarial services within the Ontario Government as well as senior level consultant at the Department of Multiculturalism that serves Canada’s multicultural population.

During her tenure in the civil service Olive worked as an information officer during the Ontario Women’s Directorate’s public education campaigns on wife assault and sexual assault in 1989. She was also involved in recruiting and placing temporary clerical and administrative personnel during the initial set-up and organization of the CCAC. Today, the CCAC is a part of Ontario’s Ministry of Health and Long Term Care.

I congratulate Mrs. Olive Rose Steele in advance, not because she is a Candidate for City Councillor but because her intention for running is purely to serve the residences of Mississauga.

“I am a community-oriented individual who will work successfully to achieve Ward 5’s top priorities in an ethical manner,” she boldly says. “I am not running for City Councillor just to say that I am a politician. My candidacy for Councillor is my commitment to serve and to help the residents of Mississauga in general and Ward 5 in particular. After all, it’s ‘Our Community…. Our Ward….  Our Home….”   Spoken like no politicians we’ve ever heard. Top that Dheer, Cashin, Crombie, Parrish, Adams, Daid and others. With no tricks up her sleeves Olive is a good-hearted and honest person with accountability to South Mississauga’s residents. I, for one, can see that this years’ candidate for Councillor, Mrs. Olive Rose Steele, will go very far in the municipal elections on September 19, 2011.