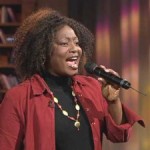 Opens up on Answering the Call of God, Her Life, Her Music Ministry, and Waiting on God

Inside of a busy fast food chain restaurant, I watched the news as customers constantly came in and went out as if through a revolving door; some sat with résumés in-hand, waiting to be interviewed with hopes of landing permanent employment or maybe a summer job, while others simply enjoyed a burger, fries and a Coke with their family and/or friends. I, on the other hand, sat waiting patiently, yet eagerly, at the far end of the restaurant in a comfy gray sofa-like chair for Jassette Haughton to arrive. Jassette Haughton, an anointed woman of God, anointed worshiper and gospel music powerhouse with a purpose to bring healing, hope and deliverance through her songs. Jassette Haughton has shared the stage with gospel music giants such as CeCe Winans, Shirley Caesar, Fred Hammond, Papa San, Marvia Providence and many others.

Several minutes later Jassette strolled in and made an abrupt stop a few feet away from where I sat. She glanced in my direction with a quizzical expression on her face and I surmised that she was trying to figure out if I was the lady she was scheduled to meet for an interview. Her black locks with blond streaks were curly and poofy and gave her a hip yet natural look; the soft toned makeup she wore gave her beautiful face and ebony complexion a natural glow. Hanging from her neck was a chunky silver necklace that created great contrast with the flowing peach summer frock she wore. Her dress of blue, green and pink designs had gold leaves embroidered at the neckline and a smidgen of tie-dye at the bottom. She stood there for a few seconds looking in my direction, her eyes squinting behind her burgundy-framed prescription glasses, as her medium-build frame was outlined and given a luminous effect by the bright sunlight bursting in through the large windows. “Simone?” she queried and I responded with a beckoning wave of my hand, ushering her to come on over. Her immediate sense of relief was obvious in her disposition. Jassette made her way over to my table accompanied by an older lady wearing her Sunday best—I mean literally! The lady was decked out in a Dodger blue skirt suit and a matching round-brimmed hat with a big white bow centred in the middle. I thought to myself, This lady ah say one! as Jamaicans would say in Patois to mean she was looking hot!

“Hi, Simone, nice to meet you. This is my mom,” Jassette said in a soft tone. I replied by saying, “Hi, Mom, how are you?” out of respect. Her mom gave me a pleasant smile followed by a jovial “hello.” Jassette gracefully sat down across from me with great poise and her mom sat a couple of seats away from her daughter’s interview as though she did not want to be a distraction. Maybe she was right; Jassette would not get any attention with the fashionable outfit her mother was wearing. Even a few customers who walked by her table eyed her stylish ensemble and I overheard a woman giving her a fine compliment: “I love your outfit, it is stunning!”

Jassette Haughton comes from a family of songbirds. She is one of six siblings who were all blessed with the gift to sing, a gift they inherited from their mother. Jassette said her mother, a gospel singer, always had an amazing voice and loved to sing. Singing for Jassette, however, was not something she wanted to pursue. “I did not take singing seriously, as a matter of fact. I did not recognize that I could sing until my early adult years.” What she did take seriously was her immense love of dancing. “I love the arts and dancing was my first love,” she declared. In pursuing dancing, she later developed a fondness for singing, and when she recognized that she could really sing and had a commanding and powerful voice, it was life-changing.

She began working at hotel resorts in Jamaica, the land of her birth, as a cabaret singer who went by the name Fabiana, a name given her by her then friend and manager, Peter Fraser. She performed at all of the Sandals and SuperClubs Resorts on the North Coast circuit. It was then that many people began to take notice of her smooth and illustrious voice, super-animated dance moves and flashy and funky wardrobe resembling that of the Queen of Rock-n-Roll, Tina Turner. “I would dress like Tina Turner, you know, with funky clothes,” she uttered. She even received an award for Outstanding Performer from the then Prime Minister of Jamaica, the late Michael Manley. Her popularity was instant, but she knew deep down that something was just not right and that what she knew and felt was not based on a whim or nerves, it was more of a deep spiritual connection with God, as if God was speaking to her inner-man, telling her spirit-being that singing in the secular world was not the way. Jassette knew it was true. After all, she was raised in a good Christian home and was brought up with strong Christian morals and values—singing and gyrating in hotel resorts was not pleasing in God’s eyes. “This was when I knew I had to turn my life around and dedicate it to Christ,” she declared.

After answering the call of God on her life, Jassette began singing for the Lord. She started singing gospel music with a gospel band called Tongues of Fire in Toronto as the lead vocalist. Their first album, Fire, which featured three of Jassette’s songs, was nominated for a Juno Award in 1996. But Jassette’s time with the band was short-lived because God wanted to use her mightily to fulfill the plan and purpose He had destined for her. Jassette soon realized that singing would be her ministry and God would use her influential voice as a musical instrument to bring healing and deliverance and to point those lost in this grave, dark and cruel world to Christ.

Conscious about this altruistic assignment that was her destiny, knowing it would not be easy; Jassette did not lean on her own understanding, but placed her trust in the Lord and followed Him. As God lead and directed her steps, she trekked throughout North America and to many countries in the Caribbean to perform heartfelt songs of hope, encouragement and peace, and left the listeners spiritually drunk on the outside but spiritually lifted on the inside with songs such as “Plea the Blood,”a song from her current album, Take the Limits Off!.

“Don’t back down, don’t run away

Always remember to fast and pray

All you got to do is just plea the blood.”

Jassette Haughton would like God to take her music career to international grounds to win souls for Christ through her songs of worship and praise but she has learned to wait unwearyingly on the Father for the appointed time. For now, her primary focus, first and foremost, is to soak up the things of God. “Seek ye first the Kingdom of God and all things will be added unto you,” she says as an avowal because she knows that, in waiting, He will do what He said He will do for her ministry. After all, the call on her life is by no mere coincidence as God is not a God of coincidence, but a God of promise and purpose. Jassette Haughton is definitely purpose-driven and chosen to minister with psalms and hymns as God’s musical ambassador.

First published on the Caribbean Current