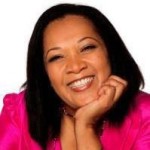 On the day when people all across the world were celebrating Valentine’s Day with the ones they love—spouses, significant others, lovers, partners, friends and family members—I was spending it with Allison Harvey. After what seemed like days of playing phone tag, I was finally able to meet with her to conduct an interview on Valentine’s Day—yes, Valentine’s Day. Many might think, and I can hear them thinking, “On Valentine’s Day? Why did they meet on Valentine’s Day?” Well, for the mere fact that the world does not stop on this day and, like for many others, life still goes on for those who have to work to make a living.

Allison and I met at The Caribbean Heat, a local Caribbean restaurant (in Toronto, Canada) that I soon found out had lots of heat…keep reading, I’ll explain further. I walked through the heavy double doors that were a bit trying to open and was greeted with loud chutney music (calypso with Indian influence) blaring throughout the restaurant. I thought for a second I was at a calypso jam or had somehow time-traveled to Trinidad’s infamous Carnival and I was not sure if I should “bust a wine” (a term used in patois to mean dance dirty) or jump on a float and start gyrating to soca music, but no, I was at a public restaurant called The Caribbean Heat.

I saw Allison waiting near the entrance holding a bright pink bag. She was not joking when she said she had a ‘pink bag’ in the description she gave me—the bag was not only bright pink, it was florescent pink! I walked further in to the restaurant and there was a DJ playing the music in an area that looked like a dance floor and all the customers seemed to be having a grand ol’ time cuddling, smooching, eating dinner and bobbing to the music. Maybe I was not entirely delusional thinking I was at a calypso party because it looked to me like the restaurant would be having just that. And from the glaring stares I got from several customers (I must have stuck out like a sore thumb); I think I was the only one who did not get the memo. As for Allison, she obviously received and read it because she was not fazed or dazed by all the action taking place inside the heated atmosphere. Maybe it was to commemorate Valentine’s Day— who knows?

Allison Harvey is a conscientious woman with a high-spirited attitude and an infectious smile. To many she is known as “The Networking Diva.” Without a doubt she is a woman about her business, but she prefers to say she is “a woman minding her business.” Allison’s robust business principles are what helped her attain her goals and many accomplishments. Through networking she has not only branded her name, The Networking Diva, specializing in marketing and advertising, she has also built an empire, The Networking Diva Group, supporting small home-based businesses and acting as an advocate and business consultant. Allison is the publisher of a well-received business magazine called Wo+Man Mind Your Business offering advice to small business owners and giving great tips on networking. As if her mountainous plate was not already full, she will be a certified travel agent in the very near future.

Allison spoke candidly about her efforts to give a helping hand to the nation of Haiti that is now known as the poorest country in the western hemisphere (The World Bank). With love in her brown eyes and sincerity in her words, Allison says something she will forever remember her mother always saying (which might have had something to do with her wanting to make a difference in someone’s life),“When you have and you give, it’s a wonderful thing, but when you don’t have and you give, it’s a miracle.” Little did Allison know years later she would make a huge impact in a country home to 10.4 million people (Trading Economics). What started off with small grassroots ingenuity and the idea to send toys to one orphanage around Christmas time has now become a yearly toy drive with hundreds of toys being delivered to six different orphanages and growing and has now added school supplies to the list. But Allison does not want to stop there; in fact, how could she when she has a heart to serve, a hunger to give in the purest form and a solid vision to provide better opportunities. She says, “I want to give people opportunities to make their lives better.” She is working to help young adults and children get a chance at a brighter and more promising future while at the same time offering a chance of employment and business ownership to women. Out of Allison’s unyielding vision birthed a few events in aid of Haiti. They are the following: Destination Haiti: A community event where guests can drop off their donations such as gently used children’s and adults’ clothes, men’s dress shirts, ties and shoes just to name a few. Goal: To aid 2000 orphans and growing with better living conditions, food and education. H.O.P.E. House: A future project aimed at building transitional homes to 500 students annually. The students will come from orphanages that discharged them at 18 years old. Goal: To hold workshops that will empower and encourage women to display their skills. H.O.P.E. House will help these women use their skills to find employment in the workforce. Travel Agent:  To shape travellers’ awareness by exposing them to and educating them about the nation of Haiti’s culture, the Creole language, the music, the people, the history and much more. They will be offered an opening to visit the orphanages and meet the individuals in hopes they will also wish to make a difference. All in all, I saw that Allison Harvey is on a straight and narrow path with God’s guidance and light directing her to support His children by creating hope today for a change tomorrow.